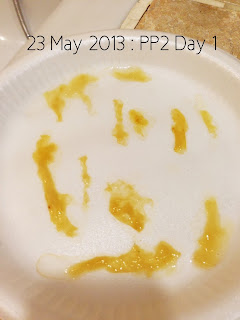 Thank God today is a public holiday, so I could take my time giving his enema.  Otherwise there would have been a mad rush to give him a quickie one at lunch time before he goes back to school for the afternoon session on Wednesdays.  This is because I give him the mebendazole in the morning at breakfast, with something fatty (chicken, in his case) for better absorption.  Then he goes to school and the castor oil (capsules) is given to him by this therapists at school approximately 3 hours after the mebendazole.  He finishes school at 12 p.m., comes home and has his lunch and I will have to put a catheter up where the sun don't shine before he returns to school at 2:00 p.m.

It's true what they say, no rest for the wicked.

And yes... the fact that I AM wicked is truly established :P

So the moral of the story is, one has to perhaps juggle the daily routine a little to fit in these parasite protocol doses.  It was 'challenge' enough with the MMS (oh did I tell you that we have had to eliminate the term 'MMS' from our vocabulary and refer to it now as 'CD' in line with Kerri Rivera's upcoming book? CD = Chlorine Dioxide. So yeah.. get with the programme ;D I may have to change the title of this blog :P)  With the parasite protocol, one will have more to keep track of:

All the above are given in different combinations on different days, no real pattern to it so one has to be on the ball enough to know what is given on which days of the Parasite Protocol from Days 1 - 18. From Day 18 onwards it's just the DE and the RP.

I have to say that I have seen a lot of worms only after starting the Parasite Protocol. So what I read about Andreas Kalcker saying that CD (read: MMS) alone will not kill the parasites and that mebendazole is required must be true.  Whilst it does happen ~ parasites being killed by CD alone, best results are achieved with the Rivera CD protocol done in conjunction with the Kalcker Parasite Protocol.

Jojo seemed to be in discomfort before his enema today, 3 hours after the castor oil.  He passed something that looked like it had been big and fat in a previous life (pic below) :P after the initial water enema.  He was all smiles again after that.